UK’s premier Public Light Festival – Lumiere in-partnership with Durham Sixth Form contacted us regarding using 9no. new ‘one trip’ shipping containers as part of an art installation, that was seen by 150,000 visitors to the event.

Lumiere is one of the UK’s premier Public Light Festivals that is held in London and Durham in the North East the festival takes place in the winter months when the dark nights are upon us and perfect for such an event. The event receives 150,000+ viewers to the Durham Lumiere event and when we were asked if we could sponsor the Event in our local Durham, we took the opportunity straight away. The idea to be incorporated with such an event and helping out the local area and the 150,000+ viewers that would see our shipping containers.

We were approached by Durham Sixth Form College who were working with Story Box and Durham Lumiere about a possible Art installation in our local area of Durham. The project was titled ‘Precious’ and had pre-recorded stories from the public from the surrounding area and throughout the country. The stories were about an item chosen by the interviewee that has a meaning behind it. Something that has sentimental value, an item that brings back memories of events, friends or family members past and present.

The project was 9no. 20ft New ‘One Trip’ shipping containers that were converted internally, the external did not get changed. The containers were stacked in three rows of three, three were left closed and three were opened for the display. The internal conversion was electrics fitted and shelving to house all the equipment for the projectors and equipment.

Working together with Durham Sixth Form, Lumiere, a team of container lifters and our delivery drivers the project was a huge success and was viewed by 150,000 visitors to Durham Lumiere.

For this art installation there was no modifications to the body of the container but to showcase the versatility of shipping containers. 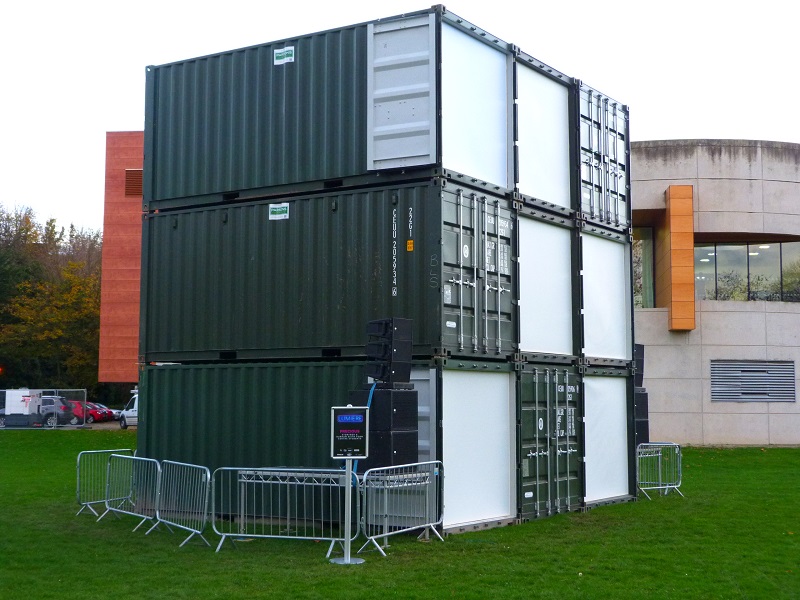 Back to all case studies

We will be in touch shortly.

Our client required a high security storage facility to store ammunition at their site, we provided the 20ft new container conversion fitted with an alarm

Using a 40ft new ‘one trip’ shipping container we converted it into a switch room for our client, with internal and external modification the shipping

20ft Container Fitted with Lifting Beam for Offshore Use

We got contacted by one of our regular clients to manufacture a shipping container conversion to their specification to be used off-shore on their rig.